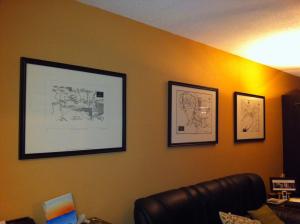 The British Library in London and now The John Rylands University of Manchester have recently added sets of the Tolkien maps Stephen Raw drew for 'The Lord of the Rings' to their world-renowned collections.

Stephen, commissioned by the publishers HarperCollins, worked under the tutilage of the late Christopher Tolkien who had drawn the originals for his father, J R R Tolkien.

The limited edition of the three maps, each signed and numbered, are still available to buy.

A unique opportunity to collect a piece of The Lord of the Rings history.

Each of the three maps is numbered 1-500 and signed by the artist Stephen Raw. Recently, The British Library and The John Rylands University of Manchester bought sets for their world-renowned map collections.

There will be no repeat printing. They can only be purchased from Stephen Raw. The prints can be despatched to anywhere in the world. The J R R Tolkien Estate has given permission for this sale on the condition that there be no more than 500 copies printed.

The three maps are: The West of Middle-Earth, Gondor, and The Shire. Sales of the maps will be only in sets of three.

For a video of Stephen at work on the maps:

The story behind the maps 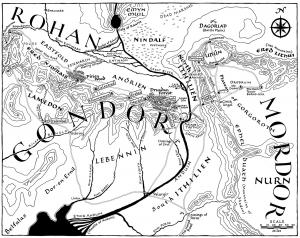 Stephen Raw was commissioned by the publishers HarperCollins to redraw the ‘Part of the Shire’ map for the, then forthcoming, newly edited publication of J R R Tolkien’s The Lord of the Rings. Raw’s brief was to keep the original feel of the maps while making sure that legibility, when reproduced at the size of a paperback, was paramount. None of the original cartography by Christopher Tolkien for his father, J R R Tolkien, had had this in mind. Furthermore, copies made of copies, coupled with greatly reduced sizes and printing on cheap paper, over the years had made the maps difficult to decipher.

When the result of Raw’s ‘Shire’ map was seen by both Christopher Tolkien and the publishers, the decision was taken to go ahead with a further commission to redraw the remaining maps. An additional map, a key map (not for sale) was drawn to give an overview of The West of Middle-Earth which was to be reproduced as before in four sections on four pages. The West of Middle-Earth limited edition print will be the first – and only – time this will be available as it was originally created by Stephen Raw.

The project took a year to complete. During that time size trials were made and corrections and questions went to and fro between Stephen Raw and Christopher Tolkien in France where he lived until his death in January 2020.

Finally, in April 1994 the final artwork for all seven maps was delivered to the publishers. The new edition of The Lord of the Rings, published later that year, was printed with the new maps. All subsequent English editions have included them as well as a few foreign editions. Christopher Tolkien wrote ‘A Note on the Maps’ (page 1140 of the one-volume edition) in which he gives an explanation of the background to the maps and Stephen's part in them. Raw estimates that the maps will not be redrawn for a very long time especially as the direct link between J R R Tolkien, through his son Christopher, to Stephen has now been been broken. It is no exaggeration then, to describe this limited edition as a unique opportunity to purchase them.

Description of the three maps

The set for sale comprises all three maps. They are ‘reproduced and distributed with the kind permission of the J R R Tolkien Estate Limited’, having these words, as well as ‘© The J R R Tolkien Estate Limited 2003’, printed on each sheet. The paper, specially bought in from Italy, is 200gsm watermarked Fabriano Artistico 100% cotton, acid free and mould-made with two deckle edges. It will not deteriorate in the same way as a wood pulp paper does. They are printed by offset litho. The maps will be despatched, without frames, flat-packed for overseas and UK sales. Each mailing will be insured and a signature is required on receipt.

In ‘The Lord of the Rings’ book, The West of Middle-earth map is reproduced in four sections on four pages. This limited edition print is the first (and only) time this map will be available to buy as it was originally created in its entirety on one sheet by Stephen Raw. It will be reproduced at the size it was drawn, as too will the ‘Shire’ and ‘Gondor’ maps. Although they were created at different sizes all three maps are printed for this limited edition on the same size of paper (76 X 56 cms). This is to allow those who want the set of all three mounted in frames of the same size to create a ‘triptych’.

How much is a set of the maps?

Sets of the signed maps are still at the 2010 price of £300 with £28 for postage and packaging in the UK. Overseas purchasers please apply.

The West of Middle-Earth Map 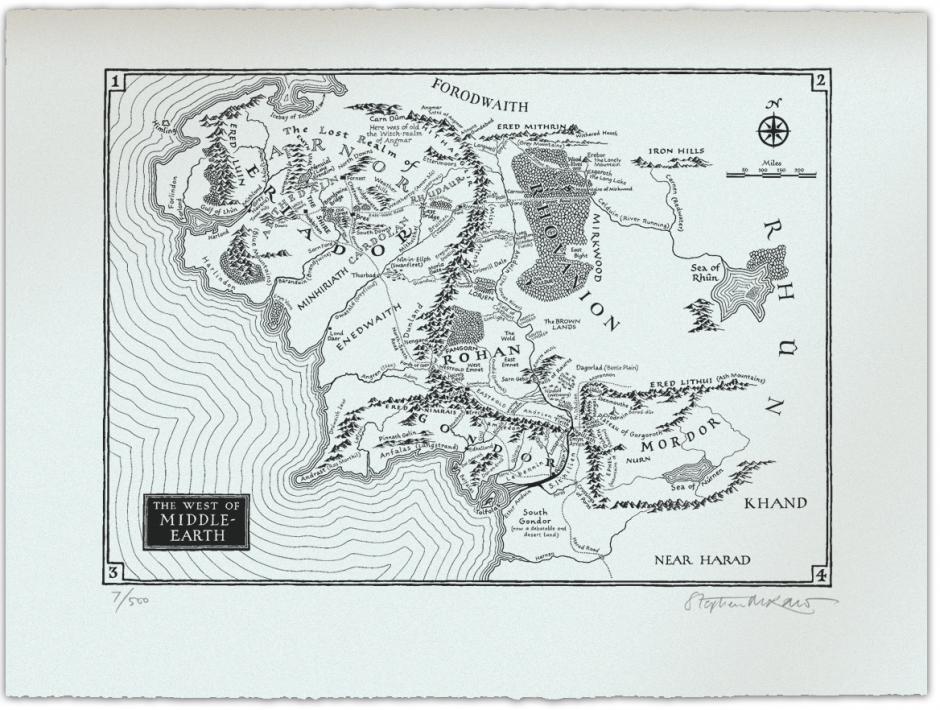 (Please note that this map is reproduced in ‘The Lord of the Rings’ (HarperCollins, London 1994) in four sections on four pages, hence the numbers in each corner. In this limited edition it is printed in the size it was originally drawn in its entirety on one sheet.) 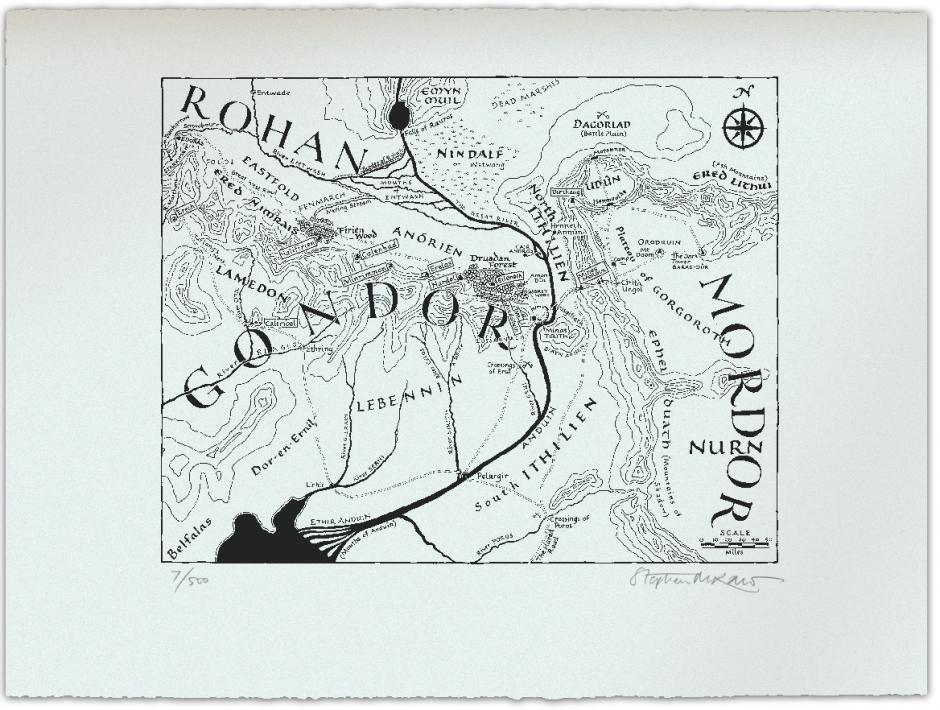 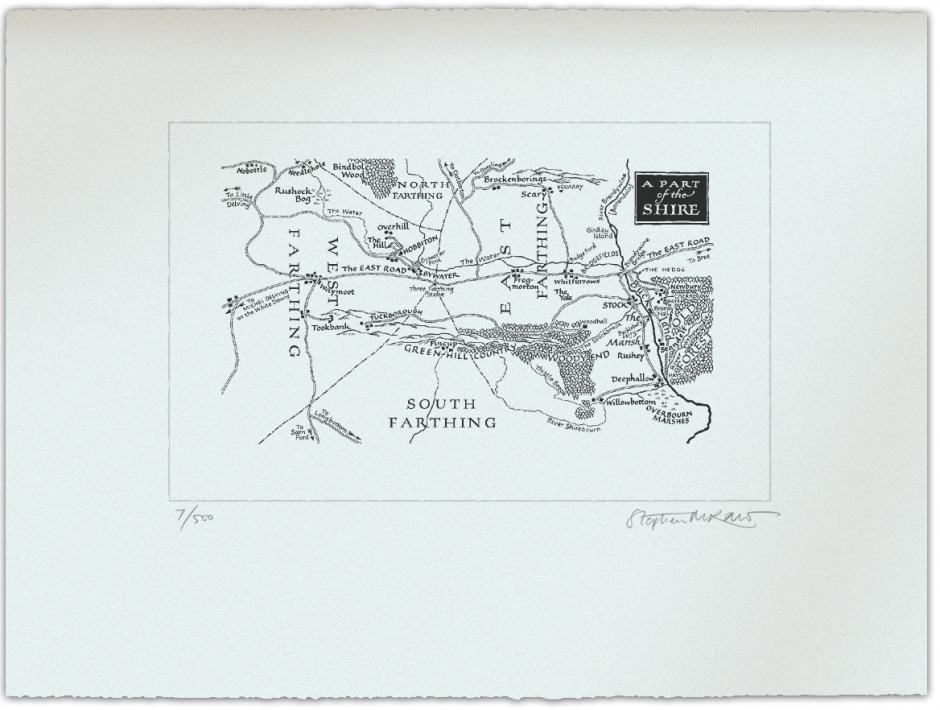