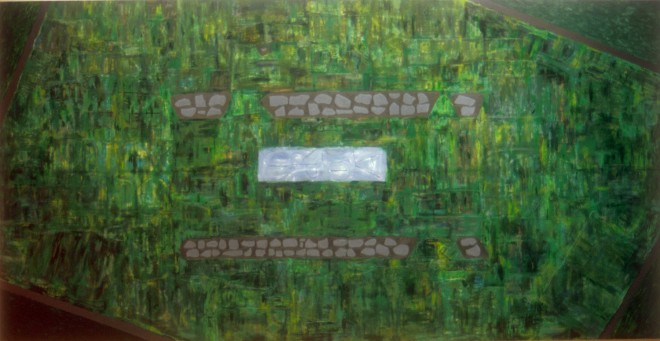 Words from the artist’s notebook, Parish records and headstones.

A casual visitor to this remote burial site on the Ross of Mull would likely guess that the headstones there represented the sum of the people who are interred in that place. Nothing could be more misleading. This site is 1,400 years old. Euan (‘Eon’), a nephew of St Columba from nearby Iona, established a church here.

The presence of granite headstones unwittingly detracts from the fact that, before the headstones were erected, thousands of people had been laid to rest here over the centuries. The majority of folk had no physical memorial. Any wooden markers have long since rotted, stones as plot indicators have been moved over time and the painted letters on the cast iron 'headstones' have disappeared. Further, the Highland Clearances of nearby people – in particular from the village of Shiaba – severed any link in their memory as to who was buried, and where.

I understand language to be at the core of this place. There is the language of those burying their relatives and friends, some in terrible grief, others celebrating a life well lived and there is the language of visitors reflecting on the people who came to rest here. It is this latter language I have imagined and lettered on pieces of paper and card. These words, like all memories, are subject to age, being obscured and forgotten, hidden by moss and the lush green grass. After I had painted and written those stories I covered them in green paint, realising their disappearnce reflected what has gone on there over many years. Even though I referenced Parish and Census records, this work is not in any sense a chronicle of those who are buried there, but rather a recognition of the human process of remembering those whose lives are over.

The painting, a palimpsest, also stands as a point of reference to engage the imagination in a ‘search’ for unkept memories.

*James McKeand inspired and helped over the four years I worked on this piece, recounting stories about the place and characters of the area as well as by answering my questions about Kilvickeon. He died before the work was finished and has now been buried there.