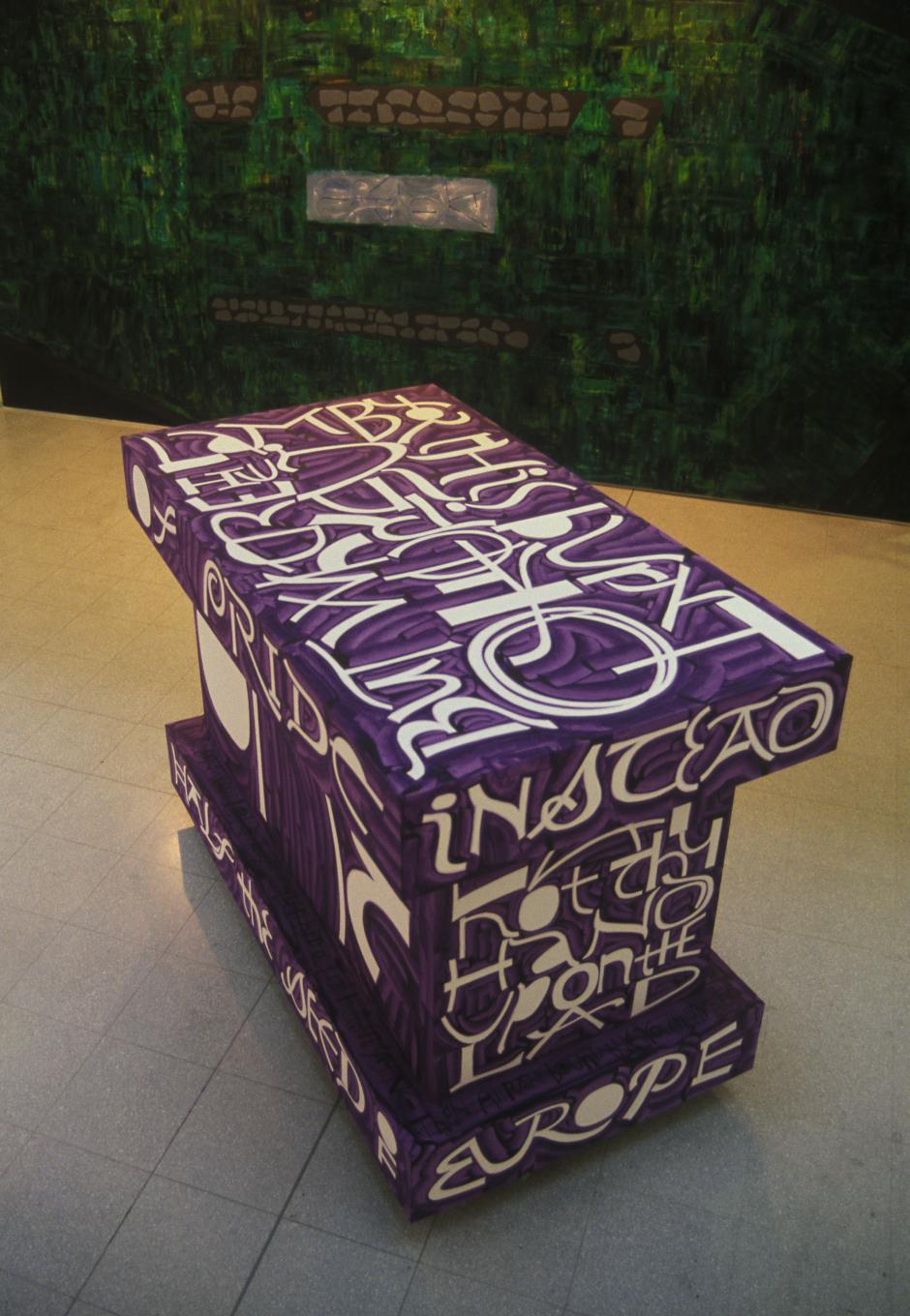 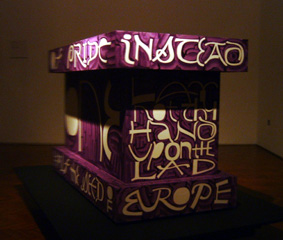 The attempt by some to legitimise slaughter in terms of ‘sacrifice’ is probably as old as armed conflict itself. Sarcophagus / Altar attempts to address the hypocrisy of those who are content to allow such rhetorical destruction of human life in their plans for ‘victory’ or ‘glory’. It also begins to ask questions about how society deals with soldiers killed in war.

Wilfred Owen was a victim himself. His words are used here in the sculptural context of a combined coffin and altar. (I see this work as a model for a stone construction with the words incised in all surfaces as here.) As with other work in this exhibition, it is meant to go beyond being a source for regular, informative reading—the poem is set in conventional type below for that purpose. Rather, this is an invitation for the viewer to perambulate around the ‘document’ and discover other ways of imagining ‘slaughter masqueraded as sacrifice’.

It is in the nature of war memorials to avoid the reality of war. Most display a necessary glorification of fighting and killing. In contrast, the ‘tribute’ here is to the futility of war.

When I began work on this piece my youngest son Ben was embarking on puberty, as Isaac might have been at the time of the Bible story. I measured Ben’s height and built accordingly. For a moment I imagined what the horror of ritual sacrifice would have meant for fathers down the ages, from Abraham on through to the ghastly parallels of the present day.

The Parable of the Old Men and the Young

So Abram rose, and clave the wood, and went,
And took the fire with him, and a knife.
And as they sojourned both of them together,
Isaac the first-born spake and said, My Father,
Behold the preparations, fire and iron,
But where the lamb for this burnt-offering?
Then Abram bound the youth with belts and straps,
And builded parapets and trenches there,
And stretchèd forth the knife to slay his son.
When lo! an angel called him out of heaven,
Saying, Lay not thy hand upon the lad,
Neither do anything to him, thy son.
Behold! Caught in a thicket by its horns,
A Ram. Offer the Ram of Pride instead.

But the old man would not so, but slew his son,
And half the seed of Europe, one by one.